The winner of the Independent Pharmacy Innovation Award was Bernadette Brown of the Cadham Pharmacy Health Centre, Glenrothes 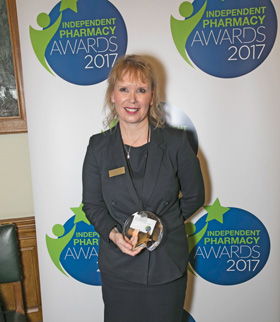 Bernadette Brown’s pharmacy has recently been transformed following the installation of a robot funded by the Scottish Government and is now known as the Cadham Pharmacy Health Centre.

The BD Rowa machine has been installed so that the pharmacy can assess its value in freeing up time for the provision of clinical services. It is one of six pilot sites in Scotland where the value of automation is being assessed. Bernadette is in no doubt about that value already.

Automation, she says, has given her the most precious commodity of “time”. She uses that time to good effect – for walk-in triage and dealing with long-term conditions. No longer do pharmacists have to do a final check on a dispensed medicine. All that is needed is a clinic assessment and the rest can be left to trained staff. There are now two accuracy checking dispensers and one registered accuracy checking technician on the staff.

She and her team perform about 300 consultations a month. In the triage process, the team assesses what needs to be done and deals with cases within their competencies and refer on the rest. The main disease areas where the triage service operates are in ear, nose and throat complaints, where an otoscope is used to diagnose minor complaints such as otitis externa and otitis media (with prescribing where appropriate) and in chest conditions, where spirometry and feNO testing using a Niox device is employed. The use of high tech machinery to help determine lung health can transform a person’s health, Bernadette says. The ready availability of these services from a pharmacy is a great public benefit, she believes.

Smooth running software
Bernadette has also invested in software to assist in the smooth running of the chronic medication service. This allows electronic coding of a start-date and the uploading of prescriptions at appropriate times so that patients receive their medicines when they need them. SMS messages are sent to patients to inform them that their medicines are ready. Another automation-assisted process is in preparation of monitored dosage systems, for which a smaller robot has been in place for some time.

Key to Bernadette’s professional development has been her becoming an independent prescriber. She achieved this while working as a practice pharmacist in a GPs’ surgery in Lochgelly, Fife. The GPs were her mentors in first achieving supplementary, then independent, prescriber status. While at that surgery, Bernadette ran one of the first hypertension/cardiovascular clinics to be set up in a GPs’ practice.She has continued to work as a practice pharmacist, running clinics for GPs, ever since. Now she runs one of those, for the nearest GP practice, within her pharmacy. Another requires her attendance at a GPs’ surgery a little further away. Bernadette says that she makes use of the experience and skills she has developed working with GPs within her pharmacy practice.

Young pharmacists
She acquired Cadham Pharmacy in 2013. She knew the business well, having worked there under its previous proprietor James McIntyre. There are two more pharmacists, one of whom is Bernadette’s daughter Kara. Both are doing clinical diplomas funded by Bernadette. She sets great store by developing her pharmacists. The intention is that all be independent prescribers by 2018. “These young pharmacists are the future. With their advanced training and triage skills they offer access to a highly skilled professional service and improved quality of life.”

The staff at the pharmacy also includes two nurse practitioners. One assists in a clinic for respiratory conditions and the other for common clinical conditions. Of her clinical conditions clinic, Bernadette says: “Hopefully it will encourage the public to use the pharmacy first. As prescribers, we can assess patients, advise and/or treat appropriately, referring when necessary.”

The pharmacy is like no other. On entry, members of the public find themselves in a reception area with no visible retail shelving. There they have access via a reception counter to the triage service, self-medication purchases, dispensing services and special clinics. There are two consultation rooms. Anyone wishing to purchase a medicine can see images of those medicines on a Rowa V Motion screen. This is linked to the robot and, once a choice has been made, the medicine is delivered by chute to the point of sale.

Of the V Motion screen, Bernadette says: “It is like no other technology that I have worked with. It allows me to advertise our minor illness and chronic medication service with videos and still pictures. The public can see products on the screens with safety messages. They are enjoying using the system and our staff find it very easy in helping people to self-medicate.”

Bernadette has taken pains to keep the ethos of a local pharmacy while embracing technology. She believes that this commendation from a local resident proves she has succeeded: “You have a space age pharmacy with a warm friendly welcome and true old-fashioned values of compassionate care.”