Itâ€™s Tuesday, for me the most ordinary day of the week because Monday is alwaysÂ a challenge, Wednesday is mid-weekÂ and Thursday is next to Friday. Itâ€™s a very quiet morning, itâ€™s 5am and Iâ€™m in a hotelÂ room needing motivation to finish reading some meeting papers. Iâ€™m sitting looking at the iPad with a cup of coffee. Thinking... 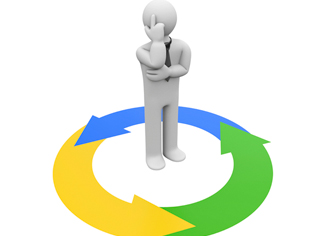 Thinking is good, isnâ€™t it? We donâ€™t do enough of it, spending time in uninterrupted thought...

I check-out and walk to my place of business. In the distance I can hear the faint whisper of traffic. Somewhere out there is a workman with a hammer. I wonder what heâ€™s building, repairing or demolishing?
Itâ€™s cold and the fabulously blue sky hasÂ one wisp of cloud. An airplane rumbles high above. Iâ€™m walking and thinking. Iâ€™m thinking about the lack of thinkingÂ there is. In the news there is mention of medication errors and there are the usual knee jerk responses but no thought. The maelstrom of the day and pressure rob us of any chance to think.

Sad to say, most of the time we are thoughtless. Thoughtless in the way we focus on outcomes. Thoughtless in the ways we approach improving quality and performance. Casual thinkers declare: â€˜Sort out the NHSâ€™; â€˜It has to be changedâ€™ or â€˜transformedâ€™ or â€˜modernisedâ€™; â€˜Medication errors shouldnâ€™t happenâ€™; â€˜Errors are a crimeâ€™. Thatâ€™s stinkinâ€™ thinkinâ€™.

Most of the work of pharmacy is thoughtful work. Thoughtful in the way we talk to people at their most vulnerable, deal with them at the ragged edge of their lives.

Itâ€™s not just pharmacists and their teams who can be thoughtful, but everyone in the NHS. These thoughtful people can make our days seem shorter.

Thoughtfulness is the oil in the machine, the wind in the sails, the spring in a step.

Thoughtfulness makes you feel good and the people around you feel good. Maybe itâ€™s the secret key to efficiencyÂ and innovation?

Thinking stops foolish thought. You donâ€™t proclaim your innocence by imposing guilt on others. Pharmacists are being blamed for the dispensing errors all over the news. Jeremy Hunt is a master of deception, calling for an environment in the NHS in which healthcare professionals can immediately admit errors and advise
colleagues what wentÂ wrong so that others canÂ learn from their mistakes.He ignores the fact that there is an increase in vexatious complaints across the NHS, even when there arenâ€™t winter pressures, and that the current system encourages these with the riseÂ and rise of legal firms who urge people to make claims.

A study referred to by Mr Hunt and widely reported has revealed an estimated 237 million medication errors occur in the NHSÂ in England every year, and avoidable adverse drug reactions cause hundreds of deaths.

Of the total estimated 237 million medication errors that occur, the researchers found that almost three in four are unlikely to result in harm to patients.

Now I appreciate just one error can lead to an unnecessary death and tarnishes the safety of dispensing the other 99.996%. But letâ€™s think, what other profession can be slated for having such a high accuracy rating?

Hunt, the NHS and those within pharmacy who didnâ€™t defend the facts or the stats, have failed the profession and patients because they chose to deflect away from the real failures: an underfunded, inefficient NHS; the worst reforms in history damaging community care; no national scheme to collate errors; and above all, swingeing cuts in community pharmacy funding. An ageing and ever-growing population will only add to long-term pressures.

So, we either stop stinkinâ€™ thinkinâ€™ or start getting used to the norm being more dispensing errors, patients dying on trollies in hospital corridors and further NHS litigation. One thing I do know is imposing guilt on others for your own failings is never a solution.Â