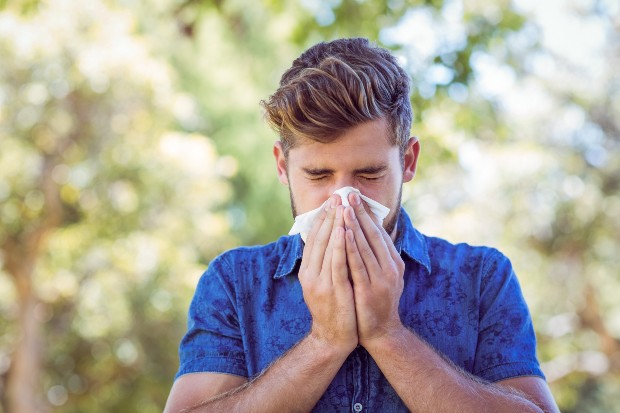 Hay fever affects about a quarter of the UK adult population and can have a significant impact on day-to-day life. OTC medicines such as antihistamines and corticosteroids can help make life bearable again, writes Steve Titmarsh...


The symptoms of allergic rhinitis – typically a runny, blocked nose and itchy, watery eyes – are the result of the body’s reaction to an antigen such as pollen. Specifically, the symptoms result from the effects of inflammation after the release of histamine and other inflammatory mediators (leukotrienes and prostaglandins) triggered by the production of immunoglobulin E (IgE) antibodies.1

People may also show symptoms of allergic rhinitis after exposure to house dust mites, when symptoms are present all year round but can peak in autumn and spring and tend to be worse on waking. Animal dander is also known to cause symptoms, again happening year-round or from time-to-time depending on the type of the exposure.

Some people are affected by chemicals at work – so-called occupational allergic rhinitis – and their symptoms may improve when they are in a different environment. Some drugs are associated with rhinitis symptoms or make them worse, including alpha-blockers, angiotensin-converting enzyme (ACE) inhibitors, beta-blockers, chlorpromazine, aspirin, nonsteroidal anti-inflammatory drugs (NSAIDs) and cocaine.2

Seasonal allergic rhinitis or hay fever is an allergic reaction to pollen that happens around the same time every year. Around three-quarters of people with asthma also have symptoms of rhinitis, which is a significant risk factor for new presentations of asthma. Indeed, poor control of rhinitis can lead to asthma attacks. Rhinitis is also thought to have a strong genetic link.1

Managing symptoms
Avoidance of pollen is the first line of treatment for hay fever. Avoiding exposure by not walking in grassy open spaces, particularly early in the morning or evening or when grass is being mowed, for example, may help reduce symptoms.

Awareness of pollen count levels provided with weather forecasts can help work out when risk of exposure is likely to be greatest. When the pollen count is high people should be advised to avoid drying washing outdoors and keep windows in cars and buildings closed. If possible they should avoid taking holidays during the pollen season and avoid going out during or after thunderstorms. After exposure to high pollen levels it can help to shower or wash hair.2

Avoiding exposure to pollen is not always possible so symptomatic treatment is the next line of defence. Antihistamines are the primary drug used for mild-to-moderate intermittent or mild persistent symptoms. Moderate-to-severe symptoms may respond to regular intranasal corticosteroids, which can also be recommended if antihistamines prove ineffective.2 Sodium cromoglicate can help with eye symptoms.1

Some people prefer not to use drugs so may be attracted to the idea of nasal douching with saline solution. It has a small effect and may reduce the number of other medicines needed to control symptoms in people who opt to use both.1

Immunotherapy
Surveys suggest that at least 40 per cent of people with hay fever still have symptoms despite treatment with antihistamines and intranasal corticosteroids,3 although it is not clear to what extent this may be due to poor adherence to medicines.1

Allergen immunotherapy may be a solution for people who do not respond to other treatments. It involves repeated exposure to allergens either by subcutaneous injection (SCIT) or sublingual tablets (SLIT).3

Guidelines for immunotherapy for allergic rhinitis have been developed by the British Society for Allergy and Clinical Immunology (BASCI). It is most effective in people allergic mainly to one type of allergen (grass pollen, tree pollen, ragweed pollen, etc).

For the treatment to be effective the type of allergen an individual is allergic to needs to be identified through clinical history and skin and/or blood testing. Patients need to understand that the therapy is not a cure – it typically results in a 30–40 per cent reduction in symptoms and medicine use in the first year. There is some evidence that the benefits of immunotherapy are long-lasting, especially in people who have received it for several years.4

In general the BASCI guidelines state that:
• The decision to prescribe SCIT or SLIT should be undertaken by a consultant with specialist training in allergy diagnosis and immunotherapy.
• Immunotherapy should be performed with at least two people present, one of whom is a physician.
• Allergen immunotherapy must be performed in specialist allergy centres with adequate facilities including drugs used for the treatment of anaphylaxis. Equipment for resuscitation must be immediately available.
• Allergen immunotherapy must be performed by health professionals with adequate knowledge and experience and the ability to recognise and treat early symptoms and signs of anaphylaxis.
• Before initiating immunotherapy patients must receive adequate information and counselling about their planned immunotherapy schedule.

Could it be Covid-19?
These days everyone is wary of symptoms that may be suggest a Covid-19 infection so it is important to be able to differentiate between hay fever and Covid – see key symptoms listed in Table 1.

Recently researchers running the surveillance app ZOE have suggested that anyone who suddenly feels unwell with a wider range of symptoms may have Covid-19. Analysis of the survey data collected by the ZOE app shows that testing people with the three ‘classic’ symptoms of Covid-19 infection – fever, cough and loss of sense of smell – would identify 69 per cent of infections.

Adding a further four symptoms – sore throat, headache, diarrhoea and fatigue – increases that to 96 per cent of cases detected. It should also be remembered that almost a third (31 per cent) of people infected with Covid-19 have no symptoms in the early stages.5

Summary
Symptomatic treatment of hay fever can improve patients’ quality of life and can help reduce morbidity associated with asthma. Pharmacists can advise patients on how to manage hay fever symptoms through reduced pollen exposure and pharmacotherapy.