Further cuts are in the pipeline for future years, but still we are no nearer to knowing why

I am profoundly disturbed by the government’s decision to cut our funding by 6 per cent: it is no less than an act of wanton destruction. By the government’s own estimates, as many as 3,000 pharmacies could be forced out.

Obviously, our representative bodies should present a united front to fight this cut, but from what I have seen they haven’t actually grasped the underlying issue – that this is simply another step in a cynical assault on the NHS.

Pharmacy Voice produced the most vigorous protest, but it won’t have the slightest effect. PSNC are in cloud-cuckoo-land in offering a service (a national minor ailments scheme) the government has already said it doesn’t want, and English Pharmacy Board chair Sandra Gidley seems intent on becoming an apologist for pharmacy minister Alistair Burt when she says he doesn’t have an easy job on his hands. Are you serious Sandra? Wake up and smell the coffee!

Mr Burt is a minister in a government that has made the decision to cut pharmacy funding, and must take his share of the responsibility. We have to understand why this decision was made; until we do, we can’t respond in an effective way.

Tellingly, Mr Burt was recently questioned by the All-Party Pharmacy Group in Parliament. The government believes “efficiencies can be made in community pharmacy without compromising the quality of services or public access to them”. Is the closure of 3,000 pharmacies consistent with maintaining public access? He wants pharmacies to become less reliant on dispensing income, but without suggesting where other income might be obtained.

If 3,000 pharmacies did close, it would have the perverse effect of making those that were left even more reliant on dispensing income than before – the complete opposite of what Burt says he wants!

And this is only the start: further cuts are in the pipeline for future years. It beggars belief, but still we are no nearer to knowing why. Jeremy Hunt’s assertion that his biggest concern is to improve safety in the NHS is laid bare for the arrant nonsense it is: increasing pressure on already busy pharmacies will have the opposite effect.

What is even more astonishing is that this decision to decimate community pharmacy has been taken at a time when GPs are struggling to cope with their workload, a situation that is set to get worse as more GPs retire and there are insufficient numbers coming through to replace them. A healthy, vibrant pharmacy sector could do a great deal to alleviate this pressure, but incredibly it seems we are surplus to requirements.

The NPA, PSNC and Pharmacy Voice have launched a petition calling on David Cameron to reverse the decision. Fat chance! I bet ministers are laughing up their sleeves at that one. PSNC has said it won’t accept the cut without a fight. What is it going to do – propose a boxing match? No amount of strategy meetings at PSNC or cooperation between the pharmacy bodies will produce anything to reverse this decision.

And it’s not because they won’t come up with all the right reasons why this cut is stupid, perverse, and, in terms of delivery of healthcare, counter-productive; it’s because they haven’t recognised the fundamental issue.

I do not believe this is about saving £170 million – that’s small change in a budget of £100 billion. I think the money is a smokescreen. I’m convinced the real agenda is the destabilisation of the NHS to set it up for more and more privatisation. You might be tempted to dismiss my thinking as that of a conspiracy theorist gone mad, but I assure you I’m not. There is a pattern that is becoming clearer and clearer.

Last summer, I described observations on the four steps necessary to make unpopular privatisations easier: change the structure of the organisation to make it more difficult to deliver services; reduce funding so that the organisation struggles financially; foster feelings of frustration and dissatisfaction among the public because things aren’t working as they should; finally, offer a solution – we’ve tried everything else and it hasn’t worked, so the best thing now is privatisation.

We have already been saddled with the structural change that created CCGs, making the NHS more difficult to run. Next came reduced funding with most NHS Trusts now running large deficits. Now it’s our turn.

And, as we know only too well, there are numerous private companies poised like vultures ready to move in at the earliest opportunity. The most difficult step is to convince the public, and this is where I believe we must act. More than anything else, more than coming up with ideas the government doesn’t want, more than trying to negotiate with ministers who aren’t interested, what we can do is mobilise the public.

We have windows on every high street, market place and housing estate in the country. It won’t be easy, and it will take money and a sustained and coordinated effort, but imagine if every pharmacy in England carried a huge poster in its window that said something like this: Health Warning: this government is destroying your NHS. Do something before it’s too late.

Withering is the pen name of a practising independent community pharmacist. Withering's views are not necessarily those of ICP. 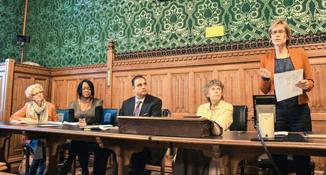