At the service of a Highland community

Fiona Johnston was last year’s winner of the Key Staff Award in the Independent Pharmacy Awards. Douglas Simpson headed north to find out more about her and her role at Right Medicine Pharmacy in Balintore, Scotland

Balintore is a coastal village in the Easter Ross area of the Highlands. It boasts an attractive harbour and a sandy beach but it is not the kind of place that would be expected to have a thriving pharmacy. But it does – in the form of the Right Medicine Pharmacy – and that is where Fiona Johnston works.

Before getting into pharmacy Fiona, who was originally from Eastbourne in East Sussex, was employed by the former Argyll and Clyde health board in Campbeltown, where she did administrative work. There she met her husband Kenny, who had just become a vet. They moved to the Highlands, where she first worked as a receptionist at Tain Health Centre. Tain is the nearest town to Balintore, about seven miles away.

Fiona started at the pharmacy about six years ago, when James Higgins was the pharmacist. He now has a pharmacy near Inverness and Fiona describes him as a fantastic boss. Interestingly, the pharmacy itself – started around 10 years ago by pharmacist Catherine Vass – was formerly the premises for a fish and chip shop. Fiona started as a counter assistant and then did an NVQ2 dispenser’s course after the dispenser left. This was followed by NVQ3 technician’s course. Fiona has ambitions to become an accredited checking technician and hopes to take the course at an opportune moment.

The pharmacy has changed hands since Fiona joined the staff, with Right Medicine Pharmacy acquiring it nearly two years ago. The pharmacists are Joanne Ryrie, who joined recently, and Maggie Mathieson, who works part time. So what are her responsibilities in the pharmacy now? “I help in the day-to-day running of the pharmacy. I make sure that all the medication that people need has been ordered. I do the MDS labels and fill the trays if the staff member who normally does it is not here. I am trained to do everything, and will cash up if needs be.”

MAS success
One area where Fiona excels is in the minor ailments service. This service is available under the NHS in Scotland for children, people aged 60 and over, as well as for people with a medical exemption certificate or on certain benefits. They register with a pharmacy and can get free treatment for a variety of common conditions ranging from acne to warts and verrucae. The medicines to be used are set out in a formulary devised by the Highland health board. Medicines to be supplied to a particular patient under the scheme are entered in the pharmacy computer and if they are not in the formulary the computer system does not allow the supply.

Fiona says: “We try to adhere to formulary items whenever possible to ensure best value for the NHS. If we prescribe certain brands off formulary they may be blacklisted and we will not be paid.” Minor ailment prescription forms are printed out in the pharmacy. The patient signs the back of the form and then the forms are sent off for payment at the end of each month. Fiona leads on recruitment of patients to the service and she has managed to get the number up to 388 so far. She plays a big role in the minor ailments service and it has grown as a result of her efforts. “It is my baby,” she says.

A work in progress
However, while recruitment for the MAS has gone well, that is not the case for the chronic medication service (CMS), under which pharmacists manage the medicines of patients with long-term conditions who are registered with a pharmacy. While pharmacists can suggest that patients are suitable for the CMS, the system depends on doctors agreeing to write serial prescriptions, and that is the rate-limiting step. Fiona says that the health centre in Tain houses two medical practices, one of which is starting to progress the CMS and one that isn’t.

Health board pharmacists are actively promoting the CMS and this could change things. So, while the CMS is up and running, the pharmacy only has about 20 or 30 registered patients. Fiona says that she is beginning to help the pharmacists with the service. She sees it as a means of ensuring that people only receive the medicines they need, and this is something that she would like to be part of. So, while the service is good for patients on it, it needs the active participation of doctors if it is to grow, Fiona says. This is not to say that the pharmacy does not enjoy good relations with the Tain doctors.

Fiona used to work for the one of the practices, which helps greatly. Other special services that Fiona is involved with include smoking cessation, where nine people are currently enrolled. The pharmacy is also often the first port of call for first aid for people who have cut themselves on the beach. As a result, Fiona is keen to enrol for a first aid course.

A special place
What is special about working in Balintore as opposed to other places? “We are quite cut off and many people here don’t drive. There is a bus that goes to Tain, but it is unreliable. We have a lot of patients on specialised medication. Though there are young people, the population is mostly the older generation. We have a good reputation for offering to help. There are lots of people who say they don’t know what they would do without us.”

In a recent instance, an Irish visitor on Victoza had left her supplies at home. The pharmacist Joanne arranged for this to be prescribed by a doctor under EU arrangements. The alternative was a private prescription, which could have cost over £100. The patient was extremely grateful. “On one occasion, when the bus didn’t turn up, I took a vulnerable patient to Tain to see a doctor. On another, I took a little girl who was pretty ill to the doctors with her mother. That is what we do here. “We do quite a few emergency prescriptions as a result of the doctors being several miles away.

“Another problem is visitors forgetting to bring their insulin, which, being stored in the refrigerator, means they often leave it behind. We have to make sure that we have plenty of insulin in our refrigerator.” And the pharmacy gets gifts from the locals to show their gratitude. Fishermen will bring something from their catch and a local man who makes “beautiful shortbread” takes some in from time to time.

The village is small and the pharmacy seems even smaller and yet somehow it is essential. Fortunately, the Tain doctors don’t dispense, as would be likely to be the case in England. If they did, the chances are the Balintore pharmacy would not exist. So how does Fiona see her future in the pharmacy? “I hope to help build up the service we provide. If we keep going the way we are I will be very happy,” she says. “I love my job. I have fallen on my feet coming here.” 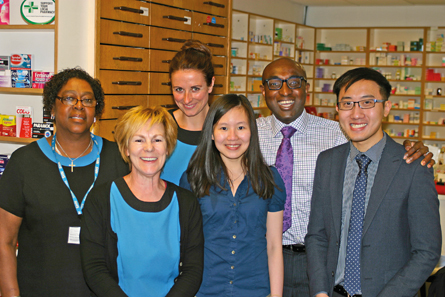 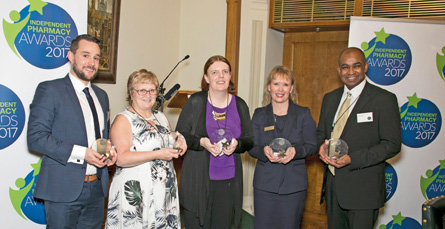