According to the Faculty of Sexual and Reproductive Healthcare (FSRH), which published these findings, this calls for more ‘visible guidance’ by healthcare professionals (HCPs). In March 2017, the FSRH launched its updated Emergency Contraception guidelines, which can be downloaded at http://bit.ly/2rQaljW. The document is aimed at HCPs and pharmacists who are in the frontline and need to make practical decisions when presented with emergency contraception cases.

Dr Asha Kasliwal FSRH president explains: “Recommendations span a broad range of care settings from specialist sexual and reproductive healthcare services, to general practice and community pharmacy, to ensure that – irrespective of where women access emergency contraception – they are given consistent, evidence-based advice on the most effective and suitable method of emergency contraception for them.”

Pharmacies are often the first stop for emergency hormonal contraception (EHC). In these cases, the FSRH guidance notes that the emergency contraceptive pill, ellaOne (ulipristal acetate), should be considered the first-line oral treatment for women.

According to HRA Pharma’s marketing manager (UK and Ireland), Clare Newins, pharmacy should be seen as a champion for the equal provision of care. “Sexual and reproductive health is a delicate yet important concern for many women, and is among one of the key reasons why they will visit their local pharmacy,” she says. “They are well placed as flexible and discreet healthcare destinations that can provide quick and professional support to women in the community.”

To support pharmacies, HRA Pharma’s Pharmacy Network launched an e-module and new CPD training in June. Pharmacists and their team members can access the modules at www.npa.co.uk/training. HRA Pharma has also launched ellaOne Facebook and Twitter channels to address the need for accurate digital information about EHC. Around 55,000 searches take place every month for ‘morning after pill’ and ‘emergency contraception’, according to Google Trends UK data. For more information, go to www.facebook.com/ WhenItMattersMost and www.facebook. com/WhenItMattersMost.

Trying times
Trying for a baby can be a sensitive topic, so what is the best advice that pharmacists can offer for couples trying to conceive? Karin O’Sullivan, clinical lead at FPA, the sexual health charity, says: “The best thing they can do is simply do their best to be as healthy as possible. Reducing stress, eating a varied diet, stopping drinking and smoking, and keeping fit will all help improve the chances of conceiving.”

A daily dose of folic acid is still at the top of the conception to-do list. “Medical advice for all women planning a pregnancy is to take a daily supplement of folic acid. As well as taking a supplement, they can eat foods that contain folic acid, such as green leafy vegetables, and breads and cereals with added folic acid,” adds O’Sullivan.

Are apps apt?
Searches in iTunes store for fertility apps yield results lists with myriad ovulation and fertility trackers, calendars and calculators. But fertility apps, while keeping track of the menstrual cycle, might not give an accurate reading of ovulation, according to O’Sullivan. “Ultimately it’s best for couples not to worry too much about the exact time of ovulation and to concentrate on having regular sex - around two or three times a week,” she suggests. “If they don’t get pregnant at once it is not unusual and it doesn’t necessarily mean that they have a problem. It can take up to a year to become pregnant, and sometimes longer.”

Pregnancy testing
In an era when digital technology moves quickly, accurate pregnancy testing is still a waiting game. “Some of the newer pregnancy tests aim to detect pregnancy earlier, within a few days of ovulation (releasing an egg). But this won’t make a difference to the estimated delivery date, as this will still be calculated in the same way,” explains O’Sullivan. “And if a pregnancy test is done too soon, they could get a false negative result.

“To be accurate, a pregnancy test should be taken when the next period is a few days late, or about 3 weeks after the last unprotected sexual intercourse. The estimated date of delivery is then worked out as 40 weeks from the first day of the last menstrual period.”

Latest statistics from the NHS reveal concerning results about incidences of Group B Streptococcus (GBS). One in five newborns infected with GBS can suffer from serious illnesses such as meningitis, septicaemia or pneumonia. In the UK alone, 70 babies die every year from GBS infection.

The better news is that women can now take a home-to-laboratory test to identify the bacterium during pregnancy, allowing the woman to be treated with antibiotics during labour to protect the baby from infection. The highly accurate Strepelle test was created in partnership with midwives and launched in November 2016. The kit contains instructions, two swabs and a pre-paid envelope. Results come back within three days of receipt by letter, text or email. If the woman is a carrier, she can follow up with her doctor or midwife and antibiotics will be administered intravenously during labour.

Brendan K Farrell, chairman and CEO of Strepelle, explains: “With as many as one in four women estimated to carry GBS, independent community pharmacists play an important role in reaching mums-to-be and explaining the risks GBS poses. “Importantly, pharmacists can offer reassurance and explain that if detected during pregnancy, GBS infection in a newborn baby can usually be prevented with antibiotics during labour.

“Pharmacists should advise customers expecting a baby to take the test from 35 weeks onwards into their pregnancy in order to find out if they are carrying the bacterium. If the expectant mother is a carrier, the results can be taken to a doctor or midwife who can then tailor a care plan and ensure that effective treatment is administered during labour, which will prevent babies from becoming exposed to the potentially harmful bacterium.”

Mums ‘on the go’
A Mum Hub study in March 2016 found that 95% of breastfeeding mums suffer from sore nipples, with a quarter experiencing nipple pain and cracking. The makers of the UK’s top selling nipple cream Lansinoh HPA Lanolin have addressed this issue, releasing its travel-friendly 10ml size last month – ideal for over-packed, overnight bags.

Cocofina produces a 10ml travel sachet of its organic virgin coconut oil. The oil contains lauric acid that converts to monolaurin, the compound found in breast milk. They are currently working with UK distributor Hampdens to open doors in independent pharmacies. Says Scott Wright, brand manager at Cocofina: “This handy, travel-sized sachet is ideal for expectant mums as it is easy to carry, naturally anti-bacterial and anti-fungal and is a highly effective nappy rash cream. Coconut oil also contains lauric acid which, when ingested by breast-feeding mums, converts to monolaurin, which is known to aid the early stage development of baby’s immune system.”

Melanie Lawson founded her company Bare Biology, which offers a range of omega 3 supplements, in 2013. Last year, she launched Bump and Glory fish oil capsules, which contain a daily dose of 560mg DHA and 40mg EPA, the equivalent of a large tin of sardines.

“I suffered from postnatal depression and took omega 3 as an alternative to traditional antidepressants to help me fight it,” Lawson explains. “When I launched Bare Biology, I wanted to have a product that would help women during pre-conception, pregnancy and breastfeeding. That is why we specially formulated Bump and Glory. It can be very hard to eat enough food packed with Omega 3 during this time. It is important for women to take omega 3 as it can help baby’s brain development, while safeguarding the stores of DHA found in the mother’s brain, and, as a result, it may also help prevent postnatal depression.” 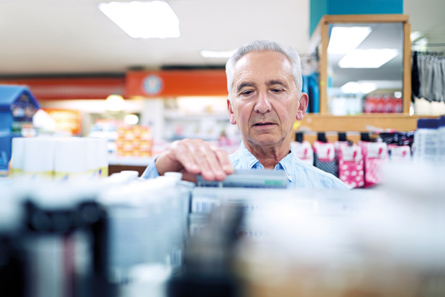